Xbox One players have been braving the harsh environments of Mars and building colonies on the Red Planet’s surface since Surviving Mars landed on Xbox One in March last year. With the upcoming launch of Surviving Mars: Green Planet expansion on May 16th, we’re excited to share that Surviving Mars is now available with Xbox Game Pass!

Surviving Mars is a challenging survival management simulator developed by Haemimont Games and published by Paradox Interactive that tasks you with constructing a self-sustaining colony capable of supporting human life on Mars. This is no walk in the park thanks to the Red Planet’s hostile environment, limited access to resources, and lack of breathable air – not exactly human friendly. To ensure your colony’s survival, you’ll need to balance everything from life support to resource management and more. But all is not lost! There are things you can do to help your budding colony along the way such as researching new technologies, uncovering the secrets of Mars, and making sure your colonists are happy and healthy.

We know that Surviving Mars is a challenging game — after all, starting life on an alien planet isn’t easy — and we want to give your colony a fighting chance! Here are some helpful tips to get started with your first Martian colony:

Never underestimate the importance of Mission Setup as it sets the groundwork for the rest of your adventure on Mars. Each Mission Sponsor and Commander has their own unique benefits and challenges. If you’re new to Surviving Mars, we recommend choosing International Mars Mission as your Sponsor and the Rocket Scientist as your Commander. This will give you a rocket load of starting resources and other in-game bonuses that will benefit your colony.

Location, location, location! The surface of Mars is chock full of resources to gather, mysteries to discover, and environmental threats to handle. We recommend new players start with a location like Elysium Beta since it has plenty of nearby resources and a low threat level. You can see a colony site’s nearby threats and resources before you pick a starting location, so have a look around and see what works best for your playstyle. 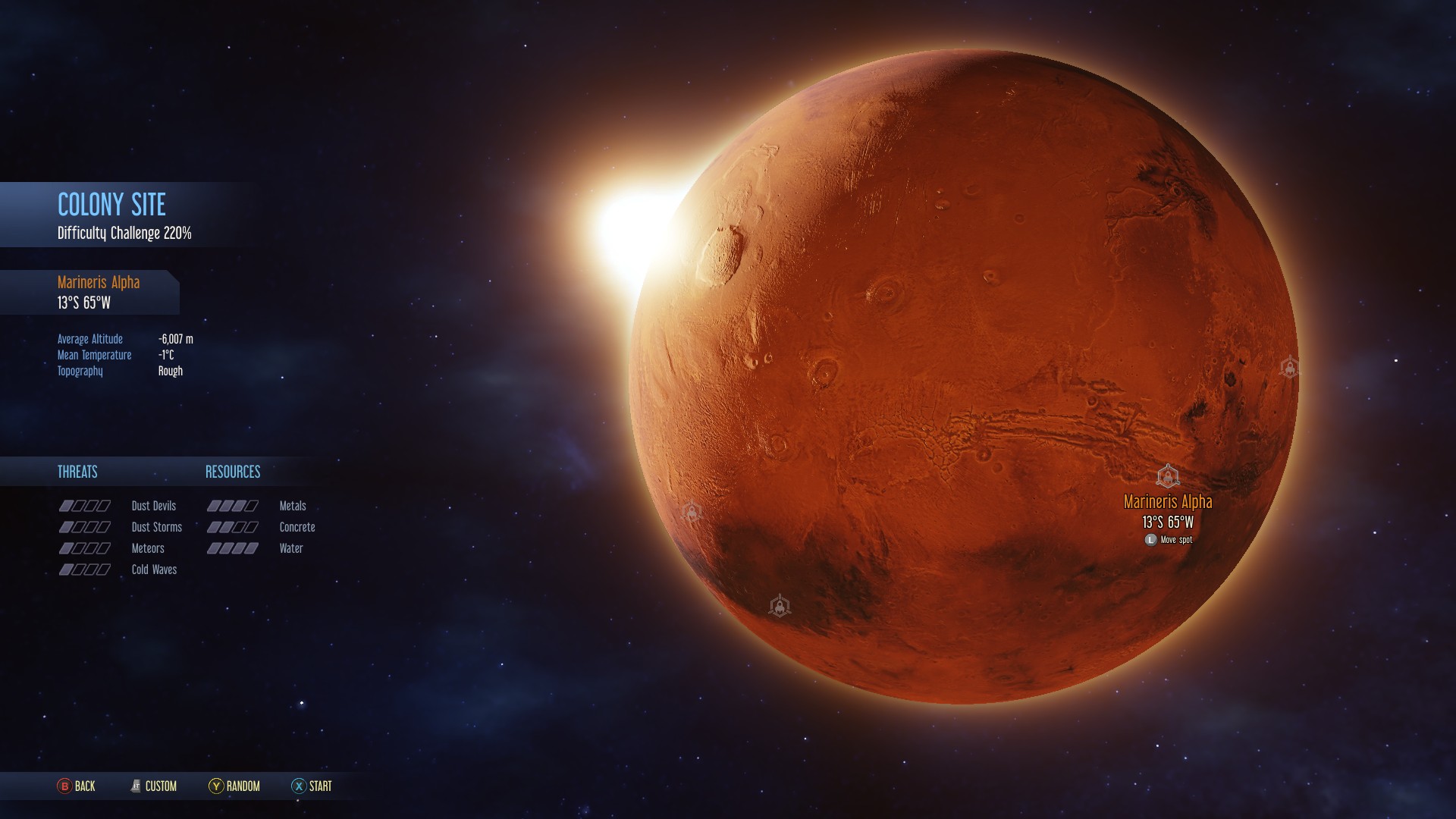 Be Mindful of Dust Clouds

Dust may not seem very threatening on Earth but it’s a big problem on Mars that can affect your colony’s productivity and maintenance costs. Be mindful of the gray outline on your map whenever you’re placing a building — this indicates a building’s dust radius. Building things like a solar panel power source outside of the dust radius will keep your maintenance costs down and help keep your colony from biting the dust. 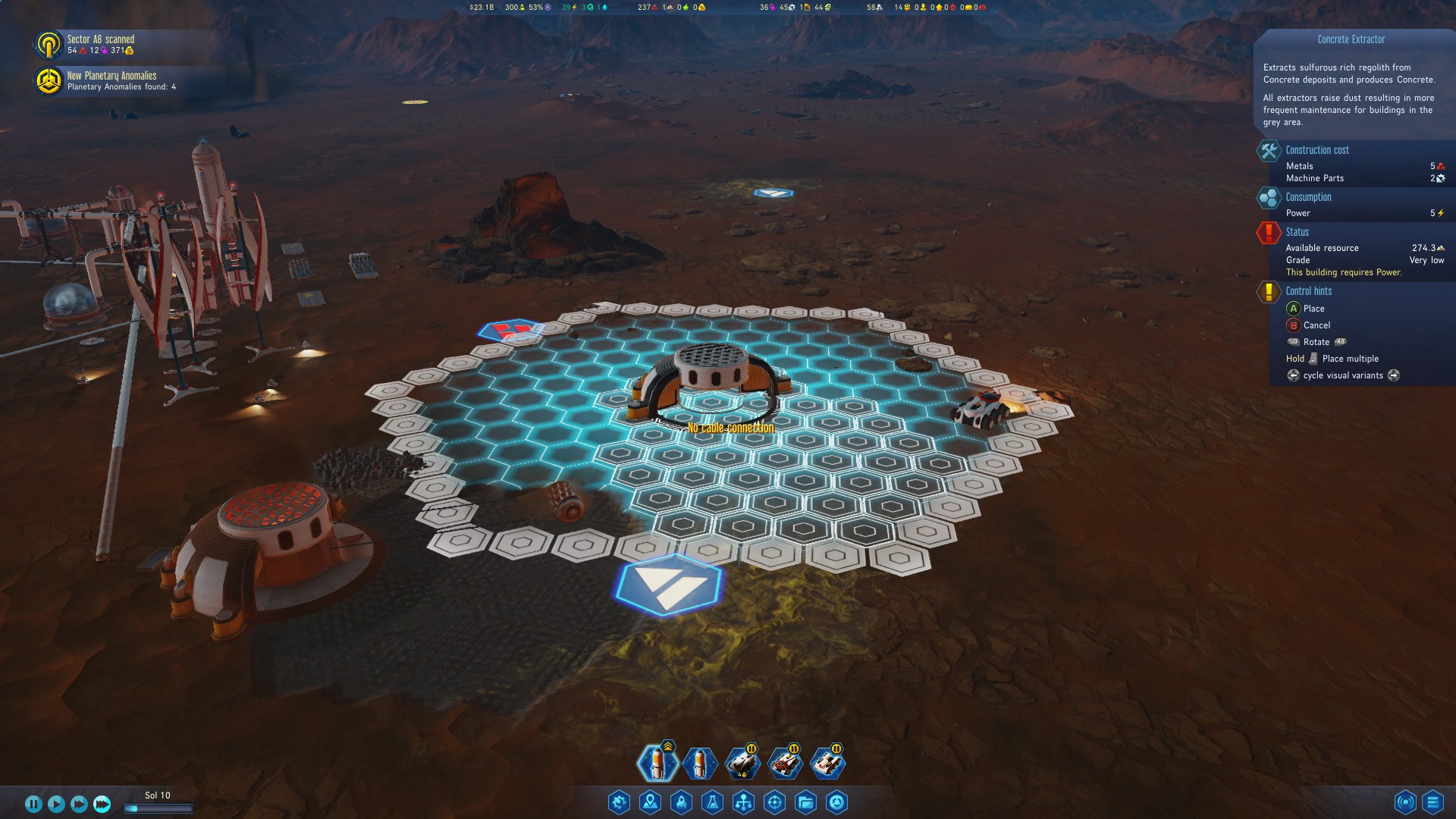 Use Resource Storage Depots and Tanks

As you gather resources, your drones will need a place to store your materials so they can be used later. Build storage depots or tanks near your resource buildings to maximize each building’s productivity. If you’re mining a resource, like concrete, don’t forget to build a Dumping Site so you have a place to store the waste rock. 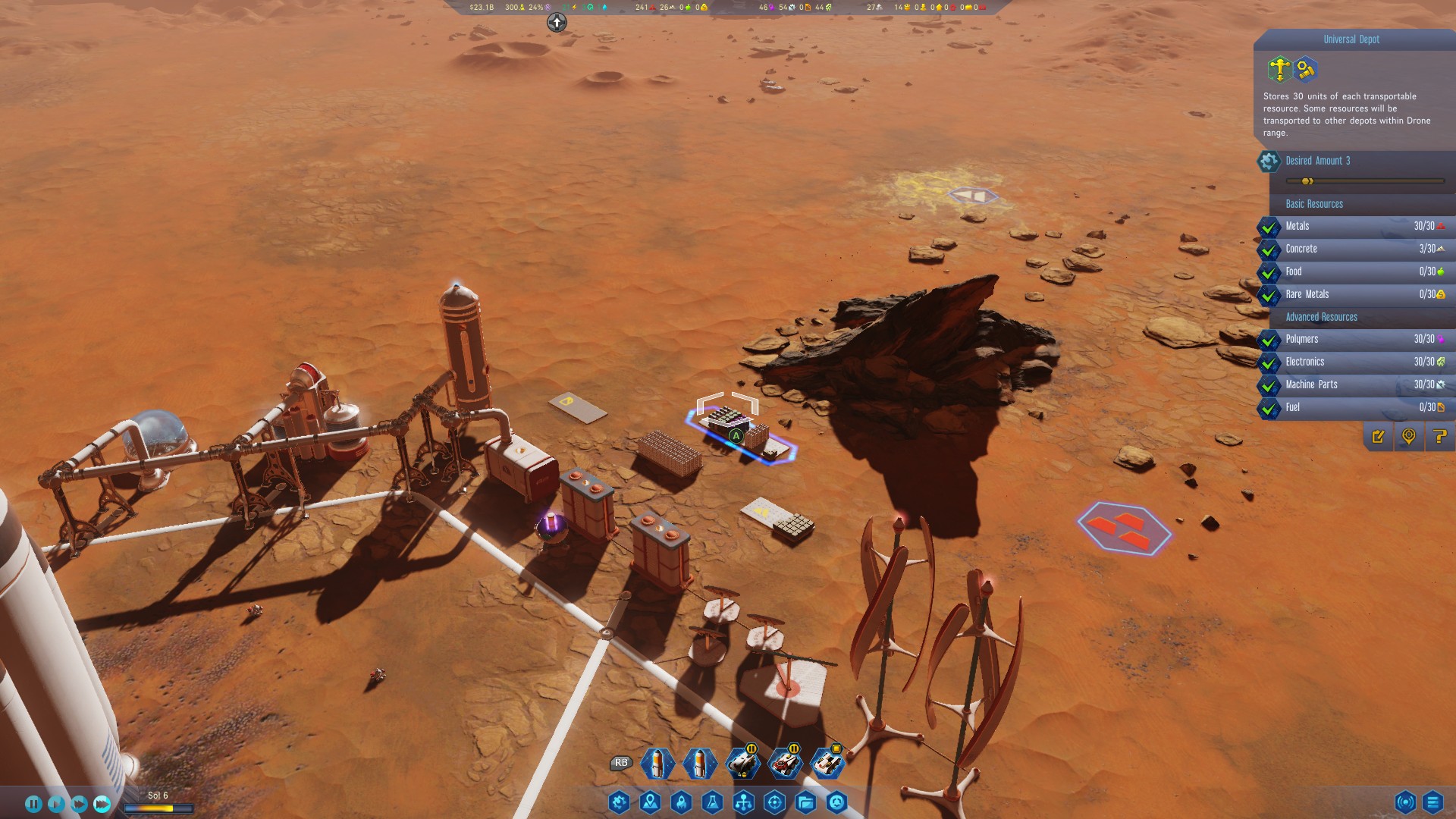 Practically every building in Surviving Mars needs power to get up and humming. When starting a game, you’ll need to build cables that connect your buildings to a nearby power source. But be careful! Some power generators are affected by the environment, so you want to make sure you’re building the right power source for the job. Be sure to check a building’s power usage to make sure it’s getting enough juice to operate.

Building your first dome is a major accomplishment that will let you start sending real live colonists to Mars. Before the colonists arrive, you’ll probably want to sort out a reliable life support system, it tends to help the quality of life. To get life support set up you’ll need to produce one water and one oxygen resource per day, as well as generators that can steadily produce 23 power without shutting down. You can build a Moisture Vaporator to produce water, a Moxie to produce Oxygen, and Wind Turbines that can constantly generate power. Now you’re ready to build your dome and start welcoming your first colonists to their new home!

With these tips, you should be ready to get your colony started but starting is the easy part and barely scratches the surface of what Surviving Mars has to offer.

In February we announced a partnership between Paradox Interactive and Microsoft to bring Paradox Mods, the first-ever direct modding pipeline for consoles, to Surviving Mars on Xbox One. This means that players can download and add user-created buildings, features, and more to Surviving Mars. This update came alongside mouse and keyboard support, allowing our players to enjoy Surviving Mars using the controls you prefer. Our team at Paradox Interactive and Haemimont Games have been humbled by the enthusiasm of the Xbox community and we’re thrilled to share Surviving Mars with Xbox Game Pass members.

If we’ve piqued your interest in learning more about Surviving Mars, you can head over here for upcoming news and community activities: www.survivingmars.com/.